As an Amazon Associate, I earn from qualifying purchases. Read more on disclaimer page.
0 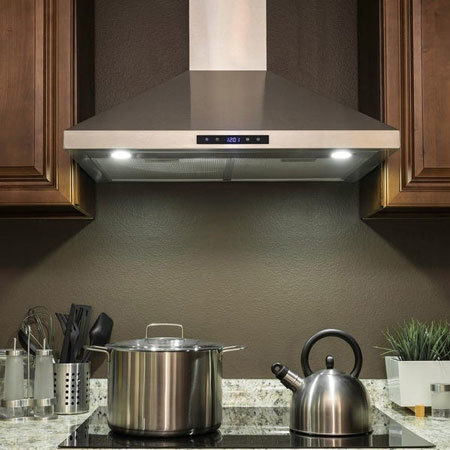 Wall Mount vs Under Cabinet Range Hood: Which One to Choose?

When it comes to choosing between wall mount vs under cabinet range hood – people tend to get confused.

Both types of range hoods look pretty similar, but the benefits and disadvantages they offer are different.

If you aren’t too familiar with what they offer, then you may end up buying the one that doesn’t fit your needs or demands.

In the worst-case scenario, you may end up with a range hood that doesn’t even work in your kitchen.

So you must avoid making such a mistake. That’s why we want to explain the difference between the two and how you can pick the right one accordingly.

Head down further to learn more!

What is a Wall Mount Range Hood?

Any range hood that doesn’t go on the ceiling and installs directly to a wall is a wall-mounted range.

It is a chimney-like range hood. Some of these wall-mounted models have their ventilations aiming towards the ceiling just like chimneys – hence the name.

This range hood is ideal for places where nothing is blocking the way between the ventilation duct and the kitchen. 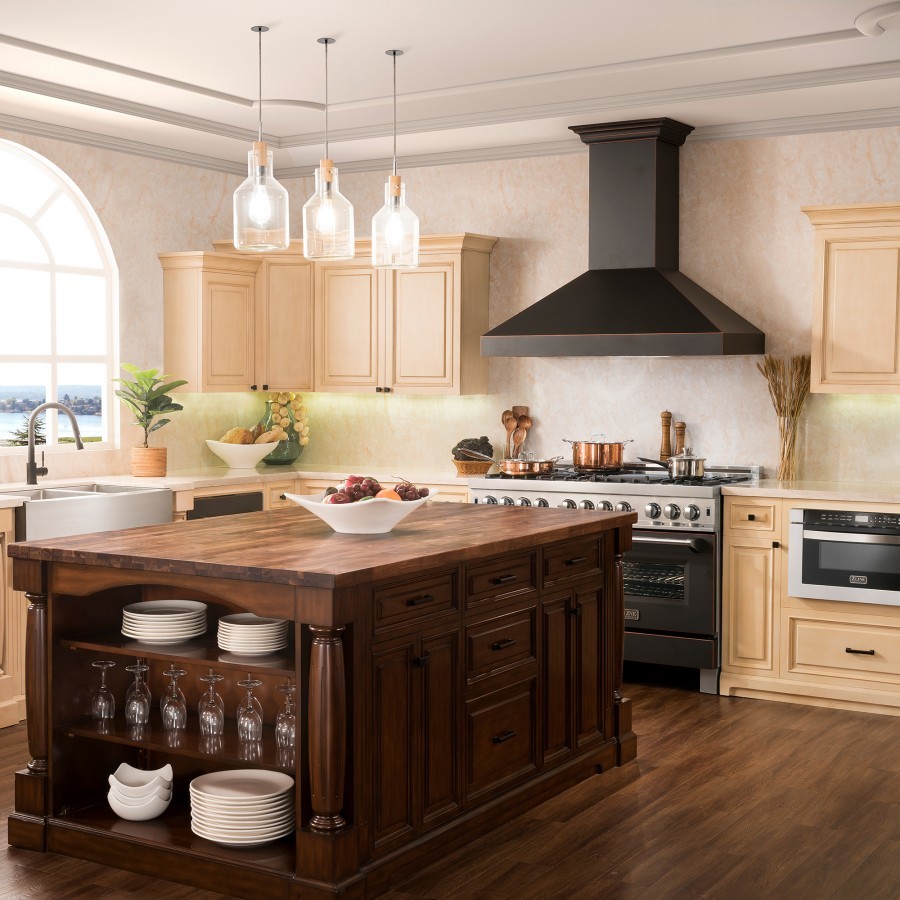 What is an Under Cabinet Range Hood?

The most common type you’ll find is the under cabinet range hood. It goes directly below a cabinet and over the range.

The design is the most popular out there because it fits in small spaces like no other. Some of these can be large, while others can be small.

Usually, they have ventilation ducts that capture the smoke and send it outside your kitchen.

They are ideal for small places with cabinets where other large hoods wouldn’t fit. 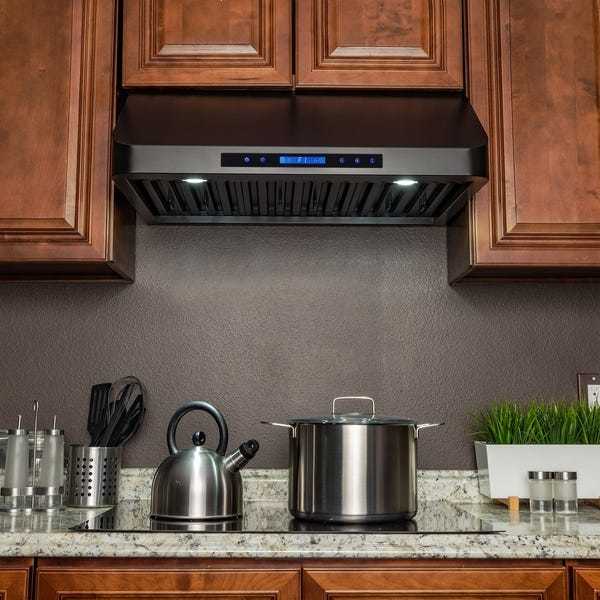 Under Cabinet vs. Wall Mount Range Hood: Differences to Consider

Now that you know how under cabinet range hood vs wall mount differ in the basics let’s go now deep into their differences.

Here you have some of the significant factors that set each of these range hoods types apart:

The first thing you’ll find is the size of the range hood.

Here, both models are reasonably small. That means you won’t have to remodel your kitchen to install one of these hoods.

However, under-cabinet models tend to be the smaller of the two. This happens because they need to save space when going under cabinets. So they can’t have large vents or bodies that take much space.

In contrast, wall-mounted models can be huge. Some models are smaller than others, of course. But they are usually larger than under-cabinet models because they connect directly to external duct systems.

Before installing either, though, you’ll have to know the space available. That way, you can pick the right size of the range hood accordingly.

The second thing to consider is the power or CFM capacity of the range hoods.

Here, you will find that under-cabinet and wall-mount models offer similar performance. But sure enough, ducted models are the most powerful.

This mostly happens because under-cabinet hoods are often ductless. They capture the smoke coming out of the stove, but they won’t send it anywhere else.

On the other hand, a wall-mounted hood usually has ventilation ducts that send the smoke directly outside the kitchen. For that, they typically offer way more power.

Overall, you will find range hoods offering between 100 CFM and 200 CFM. Most wall-mount models can provide 150 to 200 CFM with ease. Ductless under-cabinet models usually don’t go over 100 CFM which reduces their power.

Another vital factor to think about when comparing a wall mounted vs under cabinet range hood is the appearance.

They look pretty similar, but sure enough, they are way different in many ways.

For example, wall-mounted models come with the hood and a metal body where the vent goes. They often resemble a chimney, so they also called chimney range hoods. This adds a classical tone to the kitchen and often looks fantastic in big spaces and outdoor ranges.

An under-cabinet model looks better on small spaces, as it often just includes the hood, and that’s it. You won’t find a body or any other part in this type of range, as they are often space-efficient and straightforward.

In some cases, they go overlooked in kitchens due to their small design. But still, they offer the same functionality which makes them ideal for those who want a low-profile model.

If you want something large – go for wall-mounted models. And if you prefer small designs, then an under-cabinet hood is the best choice.

If you want the pick between under cabinet and wall-mounted range hoods, then you’ll have to consider their noise as well.

As they are more potent because they need to send the smoke out of the kitchen, they usually have larger engines and noisier systems.

Some under-cabinet models can also be a little noisier, but nothing compared to wall-mounted models. In fact, most under-cabinet systems are ductless, so they don’t produce much noise.

If you’re going for a quiet range hood, then an under-cabinet model is your go-to option.

While we’ve talked about ventilation already, we haven’t explained how it can change depending on what you get.

But sure, you may already have an idea. Some range hoods are ductless – so they have no vents and recirculate the smoke across the hood to capture as many contaminants & air as possible.

Other hoods are ducted or vented. These have ducts that redirect the smoke directly out of the kitchen.

Having said this, you will find that under cabinet range hood models are often ductless. This happens because they need to save space due to their design, so they don’t have ventilation systems. However, a small percentage of them do have vents.

When it comes to wall-mount models, you will find them mostly vented. These have ducts that suction & blow the smoke out of the kitchen. That’s why they’re often larger & noisier. But of course, a small percentage of these are still ductless – but more effective at capturing smoke.

If you want something vented that gets smoke out, then you’re more likely to find it on a wall-mount model. And if you prefer something more discreet, a ductless under-cabinet model is your way to go.

When comparing types of range hoods, you will also need to think about the installation.

Some models are harder to install than others, so you must pick accordingly.

Here, you will find that vented models are trickier to set up. So, wall-mounted models tend to be slightly more complicated. They usually require expert help, especially when there’s no ventilation system to work with already in the kitchen.

For ductless models, the process is more straightforward. That’s why under-cabinet models require less work and can be installed by almost anyone.

So, if you’re going for installation ease – then choose an under-cabinet model. But if you don’t care how much it can cost to install, then a wall-mounted model will be better.

Finally, you need to consider the overall cost of the range hood.

You will models going from a few hundred bucks to others goes to the thousands and more. But of course, it all comes down to the size and overall performance and/or design.

A wall mount range hood, for example, is usually larger and has complex ventilation systems. This makes them more expensive at first. And sure enough, being more challenging to install can also require extra fees setting them up.

In under-cabinet models, the costs tend to be a little smaller, sometimes up to half as affordable. And sure enough, they also require fewer installation efforts and no extra fees. So they end up being way cheaper overall.

For those who want something cheap, an under-cabinet model will be the best choice. If the price is not a problem, then a wall-mount model will do the job.

Wall Mount vs Under Cabinet Range Hood: Which is Better?

Now that you’ve learned enough about it – then it’s time to choose a winner.

Well, for us, it all comes down to your needs.

If you need something reliable that gets the job done and fits in your cabinet-free kitchen design – then go for a wall-mount hood. Be aware, though, it is way more expensive.

But if you need something small and affordable that makes little to no noise and fits under your cabinets – then go for an under-cabinet hood. Remember, however, it is not as effective when getting rid of the smoke.

The focus of choosing between wall mount vs under cabinet range hood is getting the one that you find better for your need.

Overall, the perfect range hood is the one that matches your needs above anything else. So choose accordingly by taking into consideration their differences.